The Creation of The Stool

The origins of stool are lost in time, although they are known to be one of the earliest forms of wooden furniture. The diphros was a four-leg stool in Ancient Greece, available in both fixed and folding versions. Percy Macquoid claims that the turned stool was introduced from Byzantium by the Varangian Guard, and thus through Norse culture into Europe, reaching England via the Normans. 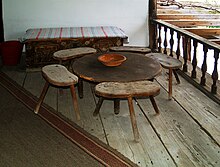 Table and stools from Bulgaria 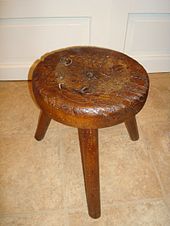 Milking Stool made for farms

In the medieval period, seating consisted of benches, stools and the very rare examples of throne-like chairs as an indication of status. These stools were of two forms, the boarded or Gothic stool, a short bench with two board-like feet at the ends, and also the simple turned stool. Turned stools were the progenitor of both the turned chair and the Windsor chair. The simplest stool was like the Windsor chair: a solid plank seat had three legs set into it with round mortice and tenon joints. These simple stools probably used the green woodworking technique of setting already-dried legs into a still-green seat. As the seat dries and shrinks, the joints are held tight. These legs were originally formed by shaving down from a simple branch or pole, later examples developed turned shapes.

Today, we have perfected even the simplest of seating creations, below are a few options we are able to offer: